In the Mid 1980’s, there were very few gas refrigerators in production on the retail market. In fact there were only 2 brands that were considered reliable. One brand name was the Consul. Made in Brazil and 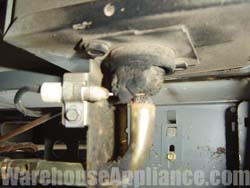 imported into North America. Based on an average electric fridge, the Consul was small. It was common place for a home owner to purchase 2 and use them side by side to accommodate the entire family. Although the 1940 model Servel propane gas refrigerators looked much larger, the capacities of both brands were very similar at about 8 cubic feet.

What design issues does the Consul propane refrigerator have? Most of the design flaws center around the burner area. The most common issue that we see is the burner burning foul due to ingested debris. This can not only cause the LP refrigerator to not cool properly but also be dangerous to the homeowner if left unattended. Very high levels of carbon monoxide can result in health issues. The old 1940 Servel units showed these same traits but on a much worse scale.

When the burner gets fouled by debris the flame puts off soot through the exhaust. This soot will coat the boiler and lower the boiler temperature and as a result the refrigerator interior temperature will rise above safe food keeping temperatures.

Pictures on this page show a severely neglected Consul burner and the resulting soot ball the was cleaned out by our service technician. This is one of the worst cases we have seen. This Consul unit required a full burner rebuild. When it left the shop, it was in good working order with interior temperatures at 29 degrees Fahrenheit in the refrigerator compartment. 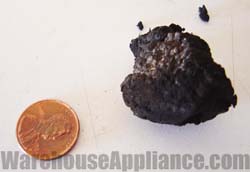 We used the same step by step procedure for this rebuild as we show in the Danby / Consul Repair DVD.